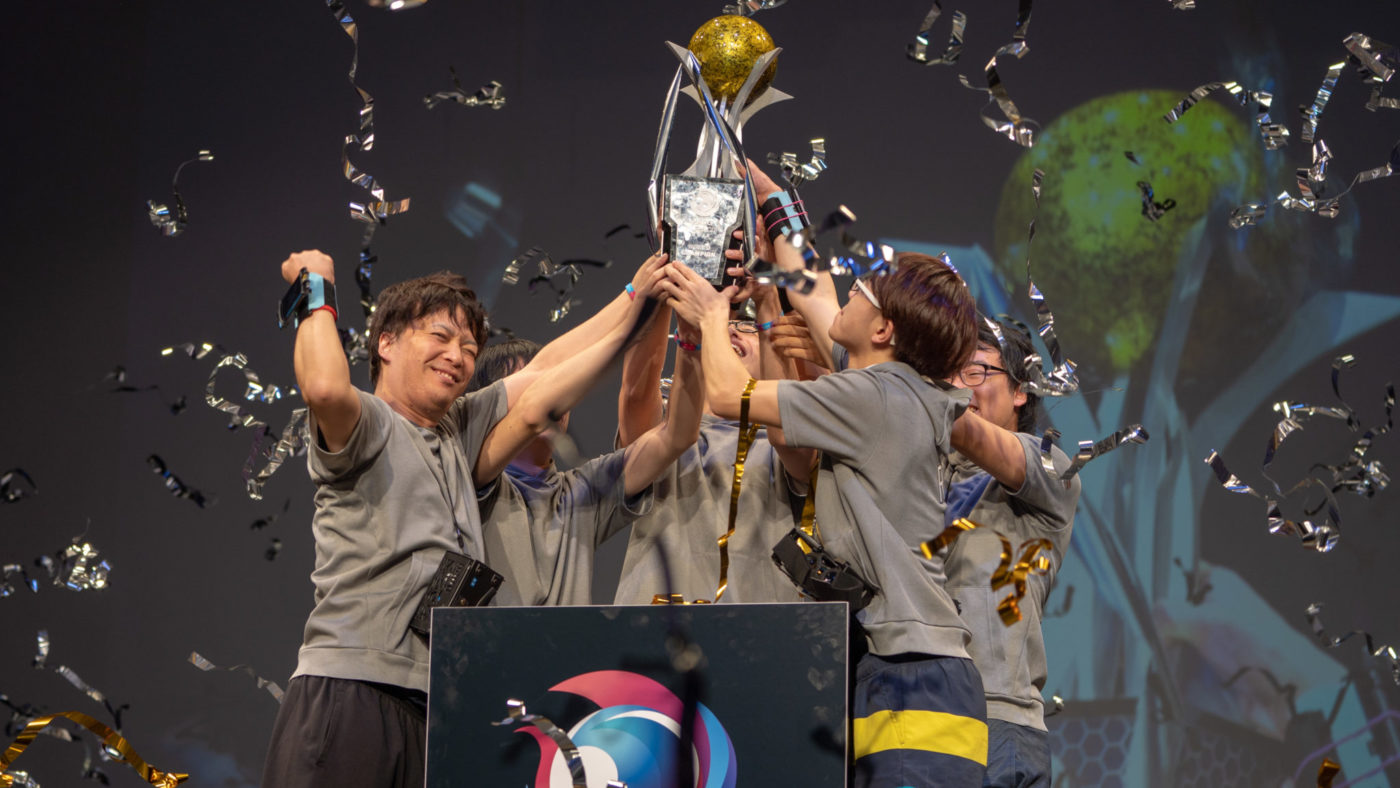 The HADO World Cup 2019 culminated an amazing year of techno sports. This was the first time this world championship event saw teams from France, Germany, Macau and the Philippines compete while shattering attendance records set in previous years.

Sixteen teams from nine countries and regions around the world battled it out on the court this year in a round robin and championship tournament. We watched with excitement and surprise as the best of the best rose to the top.

Roughly 700 fans saw the landscape of HADO techno sports slowly shift with stronger up-and-comers from Japan and overseas. Thousands of others marveled as the action unfolded on the live stream to YouTube.

The Round Robin preliminaries divided sixteen teams into four blocks to determine which two teams from each group would move on to the championship tournament.

The first match of the Round Robin between Wacha Wacha☆People and LEGENGS.MACAU set the tone and demonstrated the dominance provided by experience in a match ending 19-1. As a sport born in Japan, Japanese teams have had the luxury of time to cultivate experience even with the extremely rapid global growth of techno sports.

However, Malaysia proved this tide is changing. In the third round of the round robin preliminaries, Chariot took the first point yet Team MAS remained calm and applied pressure for a 5-1 victory. This is the first time in HADO techno sports history a team from overseas has beaten a team from Japan.

Team MAS from Malaysia and Kuro Fukuro from Singapore also moved into the championship tournament in 6th and 7th place. The skills of these teams from overseas is quickly becoming a threat to the dominance Japan has enjoyed.

The arena radiated with enthusiasm and passion for HADO on the court and in the stands. Wagokoro had fans cheering on their feet with precision play that led to victory in the round robin over summer season champion iXA/ANATSUCHI.

In the round robin preliminaries and championship tournament, Hubris competed with fierce will, skill and strategy further refined since their 3rd place finish at the HADO Summer Cup.

Wagokoro and Hubris upped the level of their games in the championship match. Wagokoro held the lead with a single point for almost half of the first set before Hubris fought back, each team taking and losing the lead until the clock ran out with Wagokoro up 6-3.

In the second set, Wagokoro took a defensive stance laying down shields for protection while fending off the polished technique and strategy of Hubris. This momentum led Wagokoro to take the set 7-3 and earn their title as the HADO World Champion.

Yet, one of the biggest surprises of the tournament was the incredible finish by BuG Bro. In every match, the team seemed to get better and better. In the fight for 3rd place, BuG Bro. dominated the first set 7-1 against the vast experience of Wacha Gonna☆People.

In the second set, BuG Bro. held the lead and was about to quench victory 5-3. With only 14 seconds left, Wacha Gonna☆People dug deep and dazzled fans with a marvelous comeback to take the set 6-5 and force a tie-breaking round.

However, the hunger of the skillful new team proved too much for Wacha Gonna☆People and earned BuG Bro. an extraordinary victory and 3rd place at their first world championships.

Soon to become a professional sports league, it is the players, teams and fans from around the world driving the evolution of HADO techno sports.

We would like to thank everyone from the athletes to the fans and spectators for their passion and excitement about techno sports. We cannot wait for even more thrilling action and surprising victories next season!

Remember to catch the play-by-play action from the HADO World Cup 2019 and all of the other previous championship events on YouTube anytime anywhere!